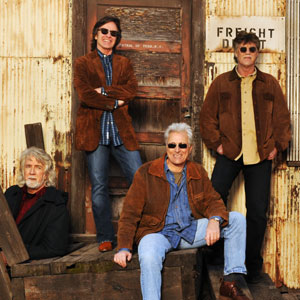 Often cited as a catalyst for launching an entire American roots music movement, Nitty Gritty Dirt Band celebrates fifty years together this year. With multi-platinum and gold records, strings of top-ten hits such as “Fishin’ in the Dark” and “Mr. Bojangles,” and multiple Grammy, IBMA, CMA Awards and nominations, the band’s accolades continue to accumulate. Their groundbreaking Will the Circle Be Unbroken album has been inducted into the U.S. Library of Congress as well as the Grammy Hall of Fame. Today, NGDB (made up of Jeff Hanna, Jimmie Fadden, Bob Carpenter, and John McEuen) continues to play to sellout crowds, proving they are as central to American music as they have always been.