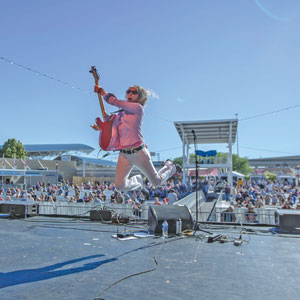 Cathy Grier’s multi-dimensional guitar technique, gutsy vocal range, and sterling songcraft have garnered acclaim worldwide, including a recent slot in the International Blues Challenge in Memphis. Trailblazing at an early age as an MTV Basement Tapes winner, Grier has since written hit songs, created a record company, produced artists in multiple languages, toured extensively, and honed her craft as a busker in the subways of New York City. Her raw, passionate performances have taken Door County by storm since she moved to Sturgeon Bay in 2016. Grier will be joined at DCA by the Troublemakers. The Troublemakers consists an all-star group of musicians who love the joy of performing and live to perform the Blues. A show filled with stories you won’t want to miss, with Special Guests.