The Good Sense Series: DCA At The Drive-In 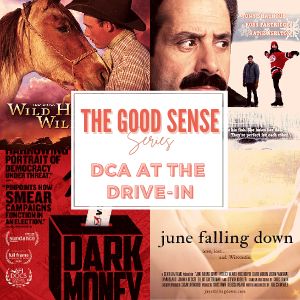 Door Community Auditorium (DCA) is pleased to announce “The Good Sense Series.” The series will kick off with the event “DCA at the Drive-In,” which will feature films that have strong Door County ties. On Monday, October 19, DCA will screen the films Dark Money and June Falling Down at the Skyway Drive-In Theater, in Fish Creek. A musical set by local folksinger Katie Dahl will be performed at 6 p.m. from her SONGMOBILE. The series is a gift to the community from DCA.

Dark Money, a political thriller of a documentary, examines one of the greatest present threats to American democracy: the influence of untraceable corporate money on our elections and elected officials. The film takes viewers to Montana—a frontline in the fight to preserve fair elections nationwide—to follow Door County native John Adams, an intrepid local journalist working to expose the real-life impacts of the U.S. Supreme Court’s Citizens United decision. Throughout this gripping film, Dark Money uncovers the truth of how American elections are bought and sold. This Sundance award-winning documentary is directed and produced by Kimberly Reed, and produced by Katie Chevigny. Runtime: 98 minutes.

June Falling Down centers around the return of protagonist, June, to her small Wisconsin hometown. After wandering aimlessly for a year following her father’s death, June returns home for the wedding of Harley, her best friend and love that might have been. Now, lost in grief over her father’s cancer, she’s not quite ready to let Harley go so easily. Filmed almost entirely in Door County, June Falling Down is a true collaboration of the Door community featuring local actors, musicians, extras, businesses, and the beautiful scenery of the county. Runtime: 120 minutes.

Gates open at 5:45 p.m., and showtime is at twilight. Admission is free, but all attendees are encouraged to bring a donation of non-perishable food and/or toiletry items designated for Feed and Clothe My People. Masks will be required for all attendees over 5 years of age when outside of personal vehicles. “DCA at the Drive-In” is sponsored by Door County Medical Center.