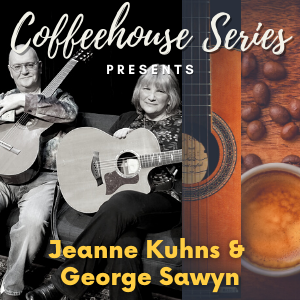 GEORGE SAWYN
George started playing guitar at the age of 12 after 5 years of piano lessons, motivated by good old American peer pressure. His earliest musical heroes include the Beach Boys, the Ventures, and the Beatles, but after about 2 years of trying to be America’s next rock star, he discovered Chet Atkins, and with him, a whole universe of musical styles, including jazz, country, folk, and classical music. George’s other musical influences include jazz guitarists Wes Montgomery, Pat Metheny, Ralph Towner, and Gene Bertoncini, jazz pianist Marian McPartland, and classical guitarists John Williams and Andrew York.

Performing her original songs, impressions of life with strong connections to nature and stories that have etched an experience in her heart. She has a passion for the natural world and saving it, connections between people and the struggles and miracles of surviving every day life. Kuhns’ voice nuanced and capable of expressing her emotions with a low breathy voice which carries up in to bell tones.

An impressive pairing of Kuhn’s powerful vocals, capable of low earthy rivers to clear high flights and Sawyn’s masterful and versatile Jazz, Blues, Rock and Classical guitar playing.  Offering an all “Original Show” of songs arranged with Sawyn’s gifted playing or a show of  their “Favorite Standards” that thrill the senses and intellect from the 1930’s on up.