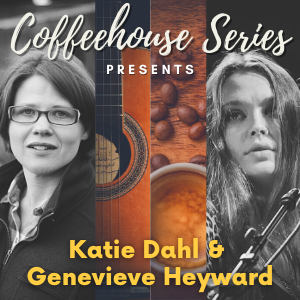 Date: Thursday, April 8, 2021, 7 PM
Tickets: Donations Encouraged via this link https://dcauditorium.wufoo.com/forms/zk3yt1z04zxvvs/
Door Community Auditorium presents: Coffeehouse Series, a series of virtual concerts and workshops featuring artists with deep Door County roots! The series Facebook premiere is scheduled for April 8th, at 7PM, with a virtual concert featuring Katie Dahl & Genevieve Heyward.  Join us on Facebook: https://www.facebook.com/DoorCommunity.Auditorium
KATIE DAHL
Based in Door County year-round, Katie Dahl normally plays over 100 shows a year across the U.S. and beyond, but lately she’s been doing Curbside Song Dropoffs in her retrofitted turquoise “Songmobile” van instead. Katie’s latest album, Wildwood (produced by Birds of Chicago’s JT Nero), spent eight straight months on the folk radio charts in 2019, including two months in the top ten. Dar Williams calls Katie’s songs “beautiful, real landscapes that help you feel places that you may have never been before–the very best kind of songwriting.”
GENEVIEVE HEYWARD
Adept at both guitar and piano, Genevieve writes the songs she sings, songs firmly rooted in the contemporary, with faint hints of tendrils running deep toward the influence of old footsteps. She’s toured nationally, internationally, and shared the stage with national touring acts and performers who have written songs for some of the biggest names in music. Genevieve cut her teeth performing, playing in front of both small handfuls and crowds of thousands. She’s as comfortable with Tin Pan Alley as she is today’s teen pop, and tells you with a voice built to bewilder – equal parts soft and smoky, and smooth as fresh Wisconsin butter. It’s a warm and natural sound, absent of pretension and imbued with an honesty that affirms the beneficent nature of her music. Genevieve said it best herself – “I want to play music because people seem to like it, and that makes me happy.”
+ Google Calendar+ iCal Export