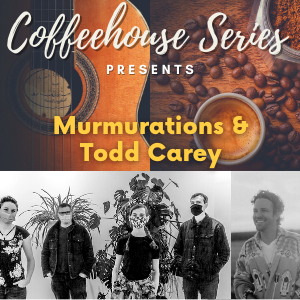 Murmurations is a group of Door County musicians that combine elements of jazz and electronic music that pulse and swell throughout long form structures. Featuring William Ellis Bradley on solar and other electronics, Jon Mueller on drums, Kaira Rouer on flute and David Utzinger on piano.

Todd Carey just wants you to feel good. The NYC (by way of Chicago) songsmith has dedicated his life to music, and has more than a few accolades to show for it. Maybe you first danced to his viral Billboard hit “Nintendo,” or caught him performing alongside Jason Mraz, The 1975, or Train (the ladder of which has brought Todd on multiple tours, and openly praised his fan connection). That’s what Todd Carey does – connect. Now he’s taking a lifetime’s worth of experiences, and putting them into the album of his career, Feel Good. The record features appearances from Charlie Puth/Fifth Harmony collaborator, Jake Miller, and Los Angeles’ Shwayze, who famously made his Geffen Records debut alongside Cisco Adler. These focus tracks are carefully woven between the rest – though, you’d have a hard time distinguishing a single from an album cut. The record’s undeniably catchy tracklist is the reason it graced the iTunes Pre-order chart (even in the age of streaming!)

There’s something refreshing about Feel Good; a care-free grace that actually makes it feel good. Listen for the full album October 2nd wherever music is heard.