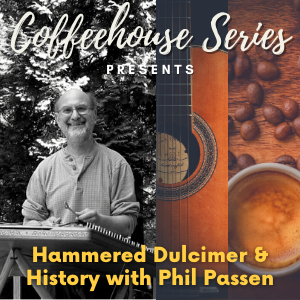 Few musicians play the hammered dulcimer. Fewer still sing while accompany-ing themselves on this fascinating instrument, whose name means “beautiful song.” Phil Passen does both. Phil plays and sings traditional American and Irish music. Can such upbeat dance music be called soothing? With rhythmic playing on fast tunes and sensitive playing on slow numbers, Phil’s music often elicits that word — “soothing.” And though it may seem contradictory, listeners also dub the music “happy” and “bouncy” as they tap their feet to the beat. Phil frequently performed for many years for the Chicago Department of Aviation’s tourist programs at O’Hare Airport, where travelers often thanked him for providing pleasure on a stressful day. Phil regularly performs at area libraries, and is included in the Best of the Best by the Library Administrators and Coordinators of Northern Illinois. He also played in the World Symphony Orchestra’s performance of The Lord of the Rings Symphony at Chicago’s Auditorium Theater. Audiences are fascinated by the uncommon, trapezoidal- shaped hammered dulcimer. After Phil’s performances, members of the audience, young and old, musicians and non-musicians, come up to take a closer look at the dulcimer and try their hand at it. Phil’s most recent CD contains seven tracks of toe-tapping old-time and blue-grass tunes and songs. With guitar, banjo, and bass accompaniment from wonderful musicians, Some Come to Tarry is a great listen for dulcimer and traditional music fans. Phil’s third CD, Tramp, Tramp, Tramp: Music of the Civil War on Hammered Dulcimer is a fascinating solo recording of music commemorating the 150th anniversary of the American Civil War. The hammered dulcimer was popular in the United States during the Civil War, and music of that era seems right at home played on this unique instrument. Phil’s second CD, with guitarist Tom Conway, is Cold Frosty Morning:Christmas and Winter Holiday Music. Swing-ing on a Gate: Traditional American and Celtic Music, Phil’s first CD, was a “most popular” choice on Amazon.com. Phil was born in Toledo, Ohio; grew up in Monroe, Michigan and Toledo; and graduated from high school in Ashtabula, Ohio. He attended Western Reserve University in Cleveland, Ohio, before participating as a full-time activist in the antiwar and civil rights movement of the 1960’s and 70’s. After Phil and his wife, writer Barbara Gregorich, settled in the Chicago area in the early seventies, they joined the Old Town School of Folk Music, and Phil began to itch to play an instrument. He really wanted to play the drums, but the set he had in mind didn’t fit into a nine hundred square foot apartment. Although Phil heard the hammered dulcimer for the first time on John McCutcheon recordings in the late seventies, he didn’t immediately make the connection between hammering strings and hammering drum heads. Finally, at a John McCutcheon concert at the Old Town School in 1994, the light dawned. Inspired anew as John played the dulcimer, Phil thought: “I can do that.” And now he does.