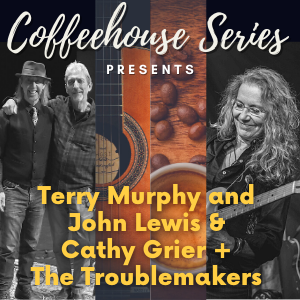 It might sound a bit unorthodox, but Terry Murphy’s musical journey really began in the Catholic school classrooms of the 1960’s.  Whatever the motivation–fear, boredom, or a mischievous desire to be a bit of a hell-raiser–young Terry picked up the guitar and started picking along with classics like The Troggs’ “Wild Thing.” He started performing in college at Eau Claire, Wisconsin in the early 70’s at open mics, coffee houses and the ever famous after bar party scene. He has continued to play at all kinds of places around the United States for all kinds of reasons, mostly for the joy of a live show with his talented music friends. Song writing became more of a focus in the last 20 plus years. He continues to share observations and opinions about everything from politics, relationships, people, places and things. In short, life in general. He enjoys the challenges of being a husband, father and teacher as well as a singer songwriter …finding a balance is the key to making it all work without getting too crazy. The Murphy clan lives outside of Waterford, Wisconsin, enjoying the darkness of summer on their front porch, watching the firefly’s dance in the distance.

John Lewis, Masters in Jazz Pedagogy, University of Miami, is a full-time performing musician/ guitarist/ teacher, currently based in Fish Creek, WI. John has performed extensively, coast to coast and abroad, has appeared on the Oprah Show, at Presidential Inaugural Balls, and a number of iconic venues. He has published several compositions both as a songwriter and as a composer of contemporary instrumental music. Currently John is performing with Guitarola, The Tom Fuller Band, Nine Worlds Ensemble, and Terry Murphy And The Cherrypickers.

Cathy Grier has been writing songs since she was ten. She uses songwriting to capture a story and express that experience with music. Her songs strive to release feelings and thought from the listener.  She writes, “My life has given me lots to write about, and I love to observe. Paying attention to the stories around me gives me lots to ponder and create with. I also believe that songwriting is a craft that needs discipline and regular practice.”