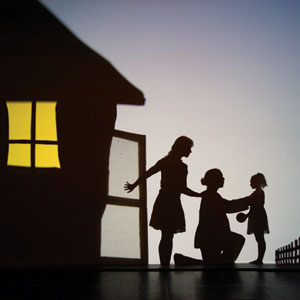 Formed by a group of college students at Dartmouth in 1971, Pilobolus has never been a “typical” dance troupe: several original members had no dance training, and some of the group’s first performances were as an opening act for Frank Zappa. But Pilobolus’s legacy of magic and movement is undeniable. Shadowland: The New Adventure uses Pilobolus’ exploration of mixed media to tell a love story about two people and their quest to save a magical bird. Employing animation, video and live shadow theater, this madcap adventure dips its toe into the genres of science fiction, film noir and romantic comedy. Pilobolus is an internationally renowned movement company. For 45 years they have tested the limit of human physicality, exploring the power of connected bodies. In 2009, Pilobolus created Shadowland, the first show of it’s kind, which has since performed in 32 countries, for over a million people. Now Pilobolus is proud to present an all-new Shadow adventure.

Pilobolus will also perform for Door County students, where they will present their program “Pilobolus Is a Fungus”.

“A stunning world of imagination, athleticism, and grace.” – Orlando Sentinel