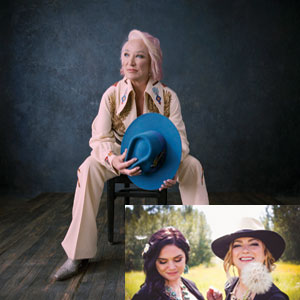 Born in Seminole, Texas, Tanya Tucker had her first country hit (the classic “Delta Dawn”) in 1972, when she was 13 years old. Since that auspicious beginning, Tucker has become one of the most influential artists in country music history, amassing 23 Top 40 albums and 56 Top 40 singles, ten of which reached #1 on the Billboard country charts. In 2020, Tucker won two Grammy Awards for While I’m Livin’, her first album of original music in 17 years. The Bluegrass Situation called the album, which was produced by Brandi Carlile and Shooter Jennings, “a stunning song cycle…the most striking album of her career.” Country duo Reverie Lane, featuring Spencer Bartoletti and Tucker’s daughter, Presley Tucker, will open the show.