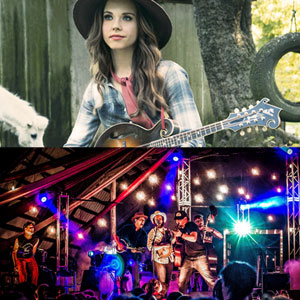 Since age 11, Sierra Hull has been recognized as a virtuoso mandolin player, astonishing audiences and fellow musicians alike. In her young career, Hull has performed at the White House, Carnegie Hall, and the Kennedy Center and collaborated with musicians like Alison Krauss and Béla Fleck. Now a seasoned touring musician in her mid-twenties, Hull is performing her most inspired and accomplished work to date. Sharing the stage with Hull will be Pert Near Sandstone, a Minnesota-based string band that rejuvenates American string music with its raw, youthful energy. In addition to being stewards of old-time and bluegrass traditions, Pert Near Sandstone also plays tightly crafted original roots material, winning over critics and fans across the country.